MASTER
Home
About
Get There
Tickets

By United We Stand Up (other events)

DHAYA LAKSHMINARAYANAN: A Hindu who grew up in Alabama trained as a scientist/engineer. She won Comedy Central Asia’s “Ultimate Comedy Challenge” and ON24’s virtual comedy competition. She has appeared on WGBH, KQED, and CBS. She is a favorite on NPR’s “Snap Judgment.”

SHAZIA MIRZA: A trained biochemist, born and educated in England, daughter of Pakistani immigrants, and winner at the London Comedy Festival.

MONA SHAIKH, A Pakistani New Yorker is the founder of MuslimsDoItBetter.com and has been featured on BBC and Washington Post.

** Food & beverages will be available for purchase at the venue. 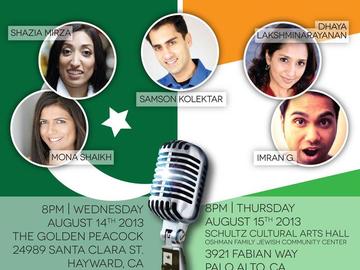 United We Stand Up

other events by this organization